Where to start reviewing this book?
I’ll start by announcing the title:
The Purloining of Prince Oleomargarine by Mark Twain and Philip Stead with illustrations by Rebecca Stead. 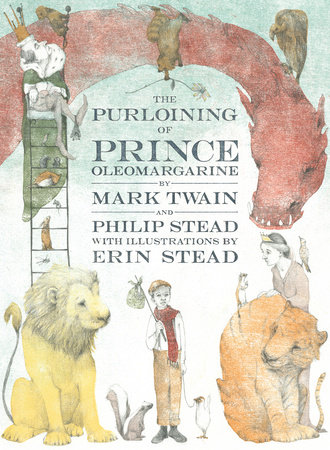 That was easy, but what should I tell you next?
I could continue with the difference between Here and There.
Or with the story itself, based in fairy tale and finished with a satisfying whimsy.
Or with the structure of the book: a conversation between the author and Mark Twain (then the author and a weasel).
Or with the refreshingly unapologetic bluntness of the asides.
Or with the humor that resonates as much for adults as it will with kids.
Or with the editor’s note at the end which explains how the book came to be. (Read it!)

But I need to continue with what struck me most about The Purloining of Prince Oleomargarine. And that is bravery. Not so much of Johnny, our hero, and not so much of Pestilence and Famine, the chicken who went without a squawk, but of Philip and Erin Stead who took on the daunting responsibility of this story from notes written in Mark Twain’s hand and found in a museum.

In short, the story begins as a riff on Jack in the Beanstalk with the wretched grandfather commanding Johnny to sell their chicken (and Johnny’s only friend) for “something worth eating.” He trades Pestilence and Famine to “an old, blind woman, thin enough to cast no shadow” for some seeds, which, when properly planted and tended, will grow a flower that “will make you feel full and you will never feel emptiness again”. And this is where we stray from Jack. The story takes us through connected scenes, which feature (among many others) Susy the Skunk, a tiger, average-sized giants, two dragons, and eventually the purloined prince from the title.

This is one of those book where the story is secondary to the wit and wisdom that, I want to say, only Mark Twain can bring us. And yet, it’s impossible for me to determine, in parts, where Twain’s notes end and Philip Stead’s words pick up. Living downstream from Twain’s childhood home and holding his work in such awe, it is amazing for me to hear from Mark Twain again … and the Steads did him proud. Bravo!