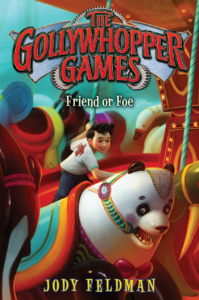 THE GOLLYWHOPPER GAMES: Friend or Foe

Everyone loves the Gollywhopper Games!
Everyone except Zane. What Zane cares about is football. He dreams of heading straight for the NFL … until he gets his second concussion. Now his parents say no football for a year.

Then along comes the Games—a chance to solve puzzles and riddles, win a million dollars, and show up on TV. Zane will need speed, smarts, and strategy. He’ll face tougher rivals than he ever did on a football field. Does he still have what it takes to win when he’s playing a whole new game?

Are you ready for action that never quits and surprises and brain teasers at every turn? Then let the Games begin! Again!